Scientists for Global Responsibility (SGR), a multi-disciplinary watchdog  organisation, have released their report on fracking and shale gas extraction in the UK. The document, compiled by scientists, engineers, architects and technologists, provides the most up-to-date analysis of the possible impacts of shale gas fracking in the UK.

In addition to concerns about unstable geology, water and air pollution the report also criticises the assertions of industry and government that fracking will increase jobs, decrease energy bills, and provide a ‘low carbon’ transition fuel.

END_OF_DOCUMENT_TOKEN_TO_BE_REPLACED

The mystique of Bonsai is very difficult to dispel. Having been involved in bonsai as a hobbyist and professionally since 2011, I’ve regularly been called upon to try and crack through the public perception as a mystic, secretive and sometimes even cruel practice.

END_OF_DOCUMENT_TOKEN_TO_BE_REPLACED

This story about the ‘Squid-inspired’ skyscraper has been in the news recently (well, the biomimetic news). “It’s a skyscraper, but its’s a squid too!”, “It won the architizer A+ competition”, “Biomimicry #YOLO” but please, can we just… not?

END_OF_DOCUMENT_TOKEN_TO_BE_REPLACED

Roads, that are solar panels. They are photo-voltaic panels that turn your morning commute into the closest you’ll ever get to a Tron Light-Cycle Race.

“That’s just a pic with Photoshop editing. Stop wasting my time with artists renditions” you say. Maybe you’re an important business man with a place to be. Or just an insufferable dick.

END_OF_DOCUMENT_TOKEN_TO_BE_REPLACED

I love plants. Both as inspiration for biomimicry and in their own right. Sometimes though, I hate them. Really hate them.

While it is a simple process (usually) to grow a cactus in a pot, or put an orchid on a coffee table, some things hate being inside, and pine away for the outdoors. They leaf drop and crisp up and are generally whiny, thankless room-mates.

END_OF_DOCUMENT_TOKEN_TO_BE_REPLACED

Biomimicry is the process of learning from nature, but what about nature evolving something we already knew?

‘The base of large trees inspired the buttresses of large buildings and cathedrals’, is a familiar, though as far as I can tell anecdotal, idea. It’s easy to see the parallels though. A large sweeping structure, supporting a tall, vertical object. When researchers began to look a little deeper though, other similarities between trees and buildings were discovered.

END_OF_DOCUMENT_TOKEN_TO_BE_REPLACED

I actually hit 10,000 views at the end of May, which was the same time you last heard from me on this site. That’s because I was busy getting this ready: 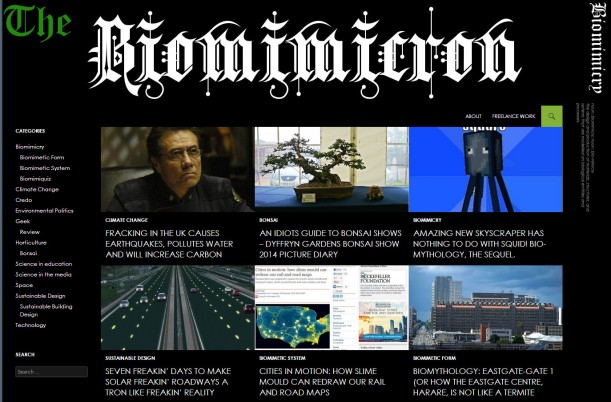 END_OF_DOCUMENT_TOKEN_TO_BE_REPLACED

The NASA Lunar Reconnaissance Orbiter is 5 years into its mission to  “help the world develop a deeper understanding of the lunar environment” and pave the way for mans return to the moon. Maybe even in a more permanent role.

This video released last week outlines many of the discoveries made since launch in 2009, highlighting a variety of ‘hole’ structures. A number of these have been found in the dark lunar maria, ‘seas’ of ancient volcanic activity. Ranging from 5-900m diameter, they widen underground and are though to be the collapsed ceiling of lava tubes. Other pits are formed from meteorite impacts.

The suggestion of the NASA video is that these areas will be suited to prolonged human settlements as they offer protection from radiation and further meteorite impacts. Living underground has the benefit of more stable temperatures as well, though we’ve made use of that since the birth of man right here on earth.

Interestingly, LROC, the camera system mounted on the LRO, indicated in 2012 that the moon may not be entirely tectonically inert either. So anyone setting up an underground home might need to tread carefully. Still, Uncle Owen and Aunt Beru would be the first to say that living in a hole in the ground out in space has its own issues…

Biomimicry has been at the heart of robotics before the term ‘biomimicry’ was even coined. An ‘Android’ is a mechanical device made to resemble, and function like, a human. The term has been a sci-fi staple for decades, though its first appearance was in 1727.

Of course now the concept is so widely accepted that Michael bay has just started his second Transformers trilogy, and farmers in China are leaving the fields  because it’s more profitable to make giant robot sculptures out of old tractors.

The field of biomimetic animal robots is in many ways even more developed than that of  humans, and progressing all the time. While I’m continually thrilled by all this design and technology, as a generation raised on The Borg and Terminator films, I can never fully relax when researching this topic. Remember, we’re only ever one AI paradox away from the Matrix.

END_OF_DOCUMENT_TOKEN_TO_BE_REPLACED

It’s no big surprise that the USA are worried about energy supply. they are well-known to have among the highest energy use per capita on the planet. So they’re looking for the solution in a typically American fashion; dramatic, high-tech, and not in their country.

In fact, not even on this planet.  This interactive infographic on space based solar power was published on the US Department of Energy website during space week.

END_OF_DOCUMENT_TOKEN_TO_BE_REPLACED

The mantis shrimp,  Odontodactylus scyllarus, is a large predatory shrimp that smashes its prey to pieces. Camouflage isn’t really a strong point though.

This colorful crustacean uses its ‘dactyl club’ to break open clam shells. Probably because they don’t spot it coming. Seeing as the US army have become interested in recent biomimetic research on the material of clam shells for use as body armor, that’s a hell of a punch. END_OF_DOCUMENT_TOKEN_TO_BE_REPLACED

I’ve been a Wierd Al fan all my life. Ever since I learnt The Saga Begins and Amish Paradise word for word and was therefore never able to remember a single line from the originals.

Now that Wierd Al is releasing his 14th, and possibly final, full album he has published a song a day in the lead up to it’s release. My favorite is definitely the Robin Thicke parody ‘Word Crimes’ (or should that be #wordcrimes? (which would be ironic (yes, this is a nested bracket (yes, that is also ironic)))).

UPDATE: Wierd Al just released Mandatory Fun,  and immediately hit the top of the charts with 104,000 sales in the US. I suspect he’ll use his new-found riches to finally move to Alberquerque.